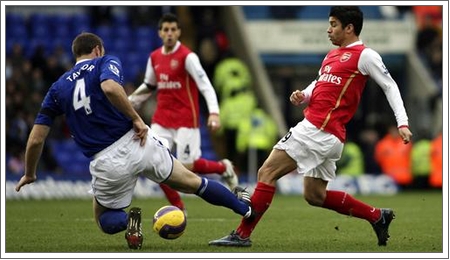 Have you taken in the image above? Good.

Now tell me – what the f*ck does Taylor think is going to happen with his studs showing high up right against the leg? He has leapt off the ground and therefore gone in with all his weight and force. There’s only one outcome from that photograph and we all know what that was.

The Eduardo tackle was like pushing someone in front of a train and killing them. But it’s okay, because you didn’t have any control of the train flying by did you? You only pushed someone. The fact that a train was passing by at the time is completely irrelevant.

Just look at Cesc’s face. He knows it’s horrific even before contact is made.

I’m careful with my choice of words here, and you will notice that I refer to the so called “tackle” as an incident, and never as an accident. An accident is forgetting to switch the lights off when you leave the house, not breaking someones leg and putting their whole career in jeopardy.

I’ll ask a serious question now – how can you win the ball with your studs showing and that high legitimately? The answer is you can’t. The bodyshape of Taylor alone shows he is out to harm Eduardo. Okay, he might not have meant to break his leg per se, but it’s crystal clear that he wanted to at least rough up Eduardo.

Anyway, it won’t surprise you that Taylor used to play for Blackburn Rovers. Once a bruiser, always a bruiser eh?

And from that, let’s see how stupid some of the people in the media and at Birmingham City really are.

Birmingham defender Stephen Kelly had this to say about the incident, criticising Arsene Wenger’s comments and justifying the tackle:

“I think Mr Wenger’s comments after the game were so harsh.

“That is disgraceful talk from Arsene Wenger. It is terrible. You know the way Martin is. He slid along the ground.

“He has gone in with one foot. You see players going in week in and week out, diving in with two feet, and lunging and that sort of thing is a disgraceful challenge.

“I don’t think you can send a player off for that. That’s football. It can happen. It is an accident.”

Slid in on the ground did he? Well f*ck me, I must have missed that one. He did come from Spurs though so it’s hardly surprising that he’s a total retard and a dumb c*nt.

We know footballers aren’t exactly of the greatest intellect but this fella takes it to a completely different level.

And if he thinks showing your studs that high against someone’s shin is acceptable then I wonder if he would justify the tackle if someone did exactly the same against him next week. Thought not. Although he is the guy who said Taylor “slid along the ground” so we already know he’s a complete f*cktard.

BBC Pundit Alan Hansen tries to justify the tackle by saying it wasn’t as if Taylor ran in from 20 yards and went in with two feet:

“It is a horrific injury but I think what you’ve got to understand first is that Taylor’s not run 15, 20 yards and jumped in with two feet.

“He’s made the tackle from a standing start and he’s just been done by a bit of pace.”

I love the way he nonchalantly says “he’s just been done by a bit of pace”. Yeah, it happens all the time broken legs, you know, with the pace and everything? To say that is completely absurd. On that basis Cristiano Ronaldo and Theo Walcott would have career-damaging injuries.

And the other strange comment is about saying he didn’t jump in with two feet. It’s quite obvious that he didn’t need to isn’t it! Unless Hansen wants Eduardo to have both his legs broken? God knows what he meant.

He also says that Martin Taylor didn’t run 15 or 20 yards as well. Well if you think about it maybe it would have been better if he did run 20 yards before making the tackle – at least Eduardo would know the f*cking challenge was coming!

The fact is dangerous tackling is characterised by high lunges and a players studs showing. Whether it is one or two-footed quite frankly is irrelevant. I was slightly surprised by Alan Hansen’s comments to be honest, because he does usually talk sense.

Then here’s the Birmingham manager himself. I’m sure he told his players to get stuck in from the off, and he said:

“It’s not in his nature to commit a malicious tackle. He didn’t feel there was much contact.

“It seems like the boys studs got stuck in the turf and that made the contact worse.”

It’s good to know that Taylor didn’t think there was much contact. If you leap from the ground and have you studs up then only something bad is going to happen. And why the hell bring up the fact Eduardo’s studs were caught in the pitch? That does no justify flying in like that, and doesn’t make the tackle any less reckless and shocking.

It might not be in “Taylor’s nature” to commit a horrible tackle but the pictures don’t lie. As I’ve mentioned before, what the hell does he think is going to happen when he goes in like that?

“Then again, his whole team were the same. Arsenal were in a bad mood all game. They were very unsportsmanlike.”

I’m not sure I have any words for that really. Retardation on a grand scale.

Okay, he hasn’t actually said anything – but his performance in the Carling Cup Final was a disgrace. One of his fellow professionals has just had his leg broken and doesn’t know if his career is over or not and there’s Drogba diving and jumping around in agony like he got shot every time a defender got near him.

He hasn’t done that in the last season or so but now it seems he’s become the diving and petulant cheat he was when he first came over to the Premier League.

But I guess he got what he deserved in the end though when it was the man he was supposed to be marking that scored the winning header.

Look at the tackle on Eduardo by Martin Taylor. And now look at the comments from Arsene Wenger after the game. If you listened to the majority of the media in this country you would think they were equally bad!

I struggle to understand the mentality of these people. Arsene Wenger is getting completely chastised for his post-match comments, which surely people can understand? On of his players careers could be over from a horrific tackle and instead of looking at Taylor who made the challenge people just can’t wait to have a go at Wenger.

But they know that. But it doesn’t stop them sticking the knife in does it? This is a golden chance to wind up Wenger and it’s just a too good an opportunity to miss isn’t it?

And then you’ve got the idiots comparing the Gallas kick on Nani to Taylors tackle! Anyone who has played football on any level knows they are completely different. I’m not defending Gallas’ kick – it was petulant and stupid – but it is nothing like having your studs up right against someones shin with your whole bodyweight behind it.

The Daily Mail have reported that it looks like Taylor shoud “recover” from the terrible ordeal he’s experienced over the last few days. My heart goes out to the poor lad, but the good news is he’ll be back for the Reading game on March 22nd.

When is Eduardo available to play again? Oh yeah, they forgot about mentioning that one.

A Small Ray Of Light…

When you just think everyone is completely retarded, there are a few glimpses of intelligence and class out there.

In a nice gesture, AC Milan issued a small statement on their official website wishing Eduardo all the best. It wasn’t needed or expected, but shows the class of a club like Milan over the ridiculous reaction from Birmingham City. Saying that though, I hope the boys stay focused and remember they are here to beat Milan and get into the next round of the Champions League.

Arseblogger links to the opinions of Tim Allardyce who believes that Eduardo could have lost his foot. And has he says, it makes a joke of all the f*ckwits who are making light of the injury.

The official Arsenal website is collecting messages and compiling a book to give to Eduardo so I urge you to send in your messages here.

Just as I finish writing this article, news has just come in thatÂ  the official Arsenal website has released a statement that Eduardo – all being well – could return in an Arsenal shirt before Xmas! The club said:

“Earlier today (Monday 25th February), the Orthopaedic surgeon and Arsenal medical staff assessed the extent of the damage and possible time scale for a full recovery.

“All being well, Eduardo will have his leg in plaster and using crutches for the next six to eight weeks. After that time, partial weight-bearing exercises will be scheduled into a slow rehabilitation process.

“It is hoped that Eduardo will be running again in six months time and making a full recovery after nine months.

“Eduardo will be released from hospital in a few days.

“The Arsenal medical team would like to take this opportunity to thank Birmingham City FC for their assistance on the day as well as the surgical and ward staff on S2 at Selly Oak Hospital for their expert medical care.

“In addition, and on behalf of Eduardo, the Club would like to thank everyone for their many touching messages of support.”