I don’t understand how everyone seems to think that Eden Hazard has had a better season than Alexis Sanchez?

Hazard has been tipped to easily win the Player of the Year awards this season and to me that is preposterous! Alexis Sanchez has been far better and done a lot more to deserve the accolade.

On a straight statistical shootout, Alexis Sanchez wins hands down. Both players have (co-incidently) played 45 games for their clubs this season, and while Sanchez has scored 22 goals, Hazard has only scored 18.

Then we come to assists. In all competitions, Alexis Sanchez and Eden Hazard are both tied on 12 assists apiece.

And finally, we come to other match statistics: 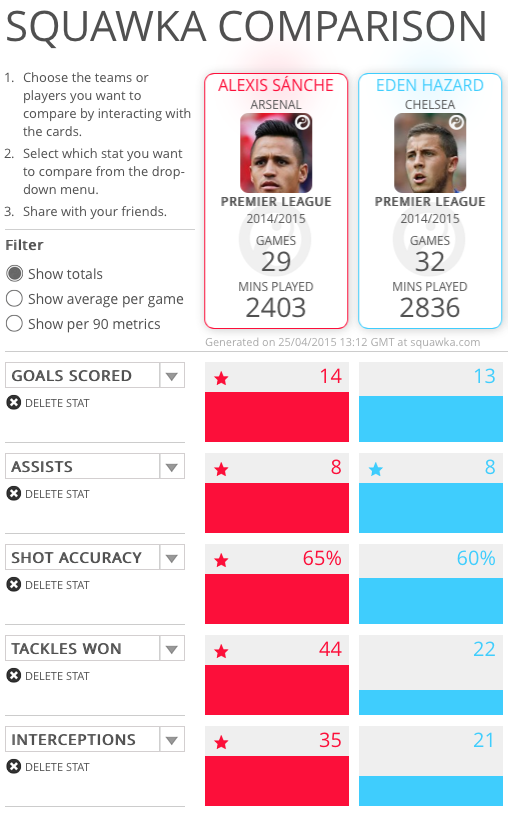 [Courtesy of the Squawka Comparison Matrix]

You can see that Alexis Sanchez has a better shooting accuracy, wins more tackles and makes more interceptions.

So as well has been more effective in an attacking sense than Eden Hazard, he also works much harder for the team defensively (and we all knew that as we see him close down and track back for pretty much the whole match – in every game).

So individually Sanchez is better, and he is more of a team player.

Then we have other factors. Eden Hazard has been at Chelsea for 3 years now, so is much more comfortable in a side which he has grown and developed. Alexis Sanchez however only joined Arsenal in the summer and despite moving to a brand new country and having to familiarise himself with new teammates (who don’t even speak the same language as him) he has putting in phenomenal performances throughout the season.

Another factor is how the player makes the fans feel. How many times has Sanchez excited the fans? He tracks down players, shows moments of brilliance with his skill and can score goals from 30 yards. He scores all kinds of goals, including headers, and has been played in several different positions throughout the season.

Eden Hazard has a whole team based around his game and while he has been skilful, he scores similar types of goals.

Hopefully people voting will take a look closer at the facts when deciding who is their Player of the Year, but I fear that they will take the “easy option” and just vote for the Chelsea man.

17 thoughts on “Alexis Sanchez Deserves To Be Player Of The Year, Not Eden Hazard”