So we’re 25 games into the Premier League season, and the Top 5 positions look like this: 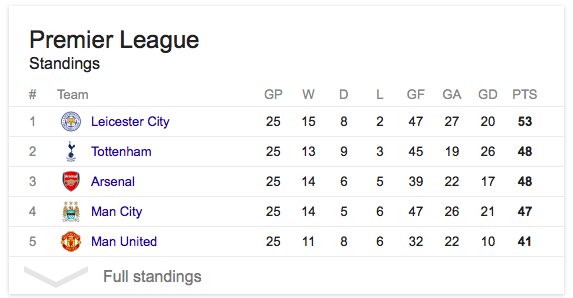 Leicester City are in phenomenal form, recently brushing aside Liverpool and Manchester City in the space of a few days with really fantastic performances. They say that football fans who don’t support Arsenal, Tottenham, Manchester City and Manchester United are cheering them on, but I have to say I’ve been hugely impressed with Leicester and hope they do well.

Their excellent performances in this campaign have been rewarded with a 5 point lead at the top of the Premier League table and the Foxes show no signs of wavering yet. Arsenal have had a very dodgy January but a professional performance against Bournemouth yesterday puts us “back in the race”.

So how is this topsy-turvy season going to end?

You would be stupid to write off Leicester because they have shown so far this season they have the desire, motivation and energy levels to go right to the very end. They fight for each other and say whatever you want about ability, price tags and reputations, nothing trumps sheer desire and the will to win. Leicester could win the league this season and a main component would be that the players and staff of the “bigger clubs” – Arsenal included – were too complacent.

This season has showed that no team has gone on a really consistent run and if Arsenal fail to win the Premier League this season, then every Arsenal supporter and his dog will know that it would have been a massive opportunity missed.

So who will win the Premier League this season?

Cast your vote below and leave your thoughts in the comments section!