When the season started, most Arsenal fans thought the starting eleven would have been pretty obvious: 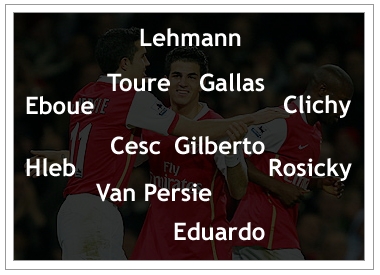 Gilberto was arguably our best player last season, and Jens Lehmann wasn’t losing any sleep over Almunia sitting on the bench. You would also say that Rosicky was our best option on the left but injuries have given Abou Diaby a chance and he is scoring goals and making things happen.

People (including myself) were also excited with the prospect of Eduardo Da Silva, who impressed in the Croatian league and has a fantastic goal-scoring record for his national team.

And people were still unsure about Adebayor.

But over our first ten games, you would have to say with the wins we have been recording this was our best line-up: 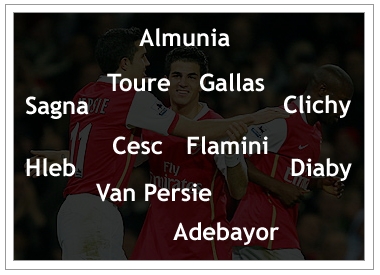 Mathieu Flamini has been particularly excellent this season, proving the perfect foil for Fabregas to express himself in front of goal. His attitude has also impressed me – he is so determined and just like a young Roy Keane. One moment which sticks in my mind was when Arsenal (via Adebayor) scored the equalising goal at White Hart Lane. Mathieu was the guy who grabbed the ball and shouted at the Arsenal players to run to the centre circle to quickly restart the game – winning is everything to this guy.

And Almunia has won every single game he has started, which is an impressive statistic.

How can you drop him?

And the fact is when Almunia does make a mistake, it doesn’t cost the team points. Most Arsenal fans would agree that after some shocking mistakes already this season, Lehmann’s time as Arsenal’s number one could well and truly be numbered.

Along with most of the young players, Sagna has been another player who has been sensational this season.

He looks like he’s played for Arsenal for years, settled in well and most importantly is an excellent defender. He has exceptional pace and also knows how to make things happen in the final third. Sagna is an an Eboue who can head and defend!

After a shaky start to the season as well Diaby has looked more effective on the left, although it can be argued who is the better passer out of Rosicky and himself.

Many people also tipped Eduardo to be the target man for Arsenal this season but Adebayor has seemingly lifted his performance level to a higher standard – and is currently the Premier League’s highest scorer.

We know that the Diaby, Almunia and Flamini changes in particular have been down to injuries and tiredness from Rosicky, Lehmann and Gilberto but what should Arsene do when they return?

Will he keep the winning formula?

56 thoughts on “What Is Arsenal’s Best Starting Eleven?”