Firstly, a happy September to you all.

So what a dramatic final day of the transfer window eh?

Arsenal wrapped up the signing of Mikel Arteta from Everton late last night, who has penned a 4 year deal. Arteta is not a typical Arsene signing, with most of his acquisitions over the last 5/6 seasons either being from the lower leagues or from abroad. Let’s hope Arteta’s time at Arsenal is more fruitful than the only other Premier League signings, Diarra, Silvestre and Gallas.

He is also 29 years old, which is certainly not an age Arsenal likes to recruit players. With Mertesacker at 26, Santos at 28, Chu Young Park at 26 and Benayoun at 31, you wonder if Arsene has finally conceded defeat in only recruiting youngsters or whether it is the board who have put their foot down and demanded proven experience be brought in.

BBC’s Sports News Correspondent, Dan Roan, has just revealed on Twitter that Arsenal lodged an initial bid of Â£5 million on Tuesday, and then offered Â£10 million yesterday, both of which were rejected by Everton. It was only when Mikel Arteta handed in a transfer request at 7pm that the move materialised. So essentially we did a “Barcelona” to Everton.

It has also been reported that Arteta was on Â£75,000 per week at Everton, and he has taken a pay cut to join Arsenal. I’ve spoken to friends who are Everton supporters and they have mixed reactions to Arteta leaving. Some are truly gutted as he was their talisman while others are being quite defensive, saying he’s past it and only passes the ball sideways.

Personally, I think it is an excellent addition to the squad. He has Premier League experience, doesn’t need time to adjust himself to the country, is excellent on set-pieces and has that creative spark we desperately need. The fact is though he’s already scored goals this season and while his goal and assist statistics may not be in the same league as Cesc Fabregas, it must be remembered he’s been playing in an Everton side which most supporters will admit play far to negatively. So at Arsenal he will have far more attacking license.

And onto Benayoun. This signing is a little more confusing but again, he is experienced so I’m not going to complain! I can’t seem him as a regular starter but after speaking to Chelsea and Liverpool fans last night, the response was far more positive than I thought. Chelsea fans will point to Benayoun having a fantastic pre-season with Chelsea, and he only left because they brought in Mata and Meireles in the transfer window.

Liverpool fans on the whole, rate Benayoun. I pointed to the fact that he never seemed to play for Liverpool but they seem to think that he was one of their best players when he was fit, and Benitez preferred to play a more “solid” formation with Torres alone up front and Kuyt in behind. And despite being mainly a substitute in his 3 seasons at Liverpool, he did still average around 10 goals per season which is a decent return.

So how will Arsenal line up this season?

We’ve brought in 5 experienced players over the last few days, along with Jenkinson, Oxlade-Chamberlain and Gervinho. So a total of 8 new players, but I can only see 4 of those making the starting line-up on a regular basis.

For me, our regular line-up will be as follows: 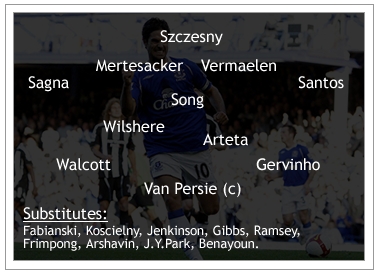 Arsene is going to want to limit the amount of disruption to the team and Gervinho is already settled into the squad. Arteta can slot in where Ramsey has been playing this season and he can fill in for Jack if he’s out injured. Santos is certain to start with sicknote Gibbs being out on a regular basis and Mertesacker will play alongside Vermaelen, or Koscielny depending if the Belgian is injured.

Chu Young Park is simply a squad replacement for Bendtner and can fill in if Van Persie gets an injury. Jenkinson has proved he is a solid performer and the same goes for Frimpong. It will be interesting to see how much Arsene uses Benayoun however; he has been a bit part player for both Liverpool and Chelsea in the past and you would think he joined Arsenal to get more playing time. At the moment though I can’t see him being more than an impact sub, as he’s been utilised in the past.

And if you still need to get excited over the arrival of Mikel Arteta, then here’s a compilation of his goals and assists at Everton:

14 thoughts on “Arteta / Benayoun / How Will Arsenal Line Up?”