I posted an online poll at the weekend, asking if Arsenal fans wanted Gonzalo Higuain or Luis Suarez at the club. There were a few other options you could choose from, including; neither of them, both of them, someone else or I don’t think we’ll sign anyone.

And the winner with 44% of the votes was Gonzalo Higuain. This is interesting as it seems as if the move is now dead, and Arsenal are looking to increase their bid for Luis Suarez. The Liverpool striker was a close second in the voting, with 30% of the votes. 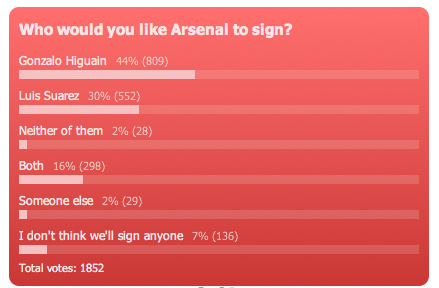 Interestingly, some supporters thought that Dortmund striker Robert Lewandowski would be a better option, although it looks like he is off to Bayern Munich either this or next summer.

The main reasons why people preferred Higuain over Suarez included the fact he would be suspended for the first 6 games of the Premier League season, has a history of biting people and can get himself banned for long periods of time.

But according to John Cross, it seems that Arsenal have had encouragement about a possible deal for Suarez happening.

So I’ll guess we’ll have to just wait and see.