The transfer window has officially closed, and I don’t think any Arsenal fan will be sad to see the back of it.

For the most part, it has been an extremely frustrating summer and we all know who we’ve been linked with and who we failed to sign. But in the end, like it or not, we have signed Yaya Sanogo, Mathieu Flamini, Emiliano Viviano and Mesut Ozil.

And with the new signings completed, how should be line up this season?

Here is my suggestion for our first choice starting eleven in this campaign: 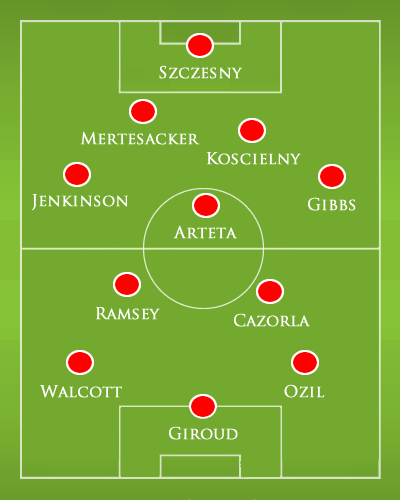 In goal, I’ve obviously gone with Szczesny. After the Aston Villa game, his form has been outstanding and if we’re going to slate him for the opening day of the season then he deserves all the credit for improving his performances and getting his act together. I haven’t seem much of Viviano but having him and Fabianksi waiting in the wings can only help Szczesny and provide more competition for places.

At right back, I have somewhat controversially gone for Carl Jenkinson. The reasons are two fold. Firstly, I just believe he is ready to make the step up. Every time I’ve seen him play he looks confident, assured and completely unphased. Many people forget that when Sagna was injured at the start of last season, for me anyway, Jenkinson was one of our best players. He’s looked solid whenever he’s played this season and can only get better. Also, his crossing and range of passing is better than Sagna’s. And the second reason is that Sagna is leaving at the end of the season so we can just use him as cover for the right-back position and in the centre and concentrate of building for the future with Carl.

The rest of the defence picks itself. Laurent Koscielny and Per Mertesacker are our strongest defensive pairing and Thomas Vermaelen is good enough cover. At left back we are particularly strong, with Gibbs our first choice, Spanish international Monreal as cover and even Vermaelen can even fill in if required.

In midfield we have a quite the conundrum. For the there midfield spots, we have Mikel Arteta, Jack Wilshere, Aaron Ramsey, Santi Cazorla, Mathieu Flamini and Abou Diaby. Jack and Diaby struggle to complete a full season so I’ve gone for Arteta in the “defensive” role, alongside Aaron Ramsey who has been excellent for the last season and a half. Then we have to put Santi Cazorla in there as he is the creative hub of the team.

In attack, our options have been boosted with the arrival of German international and Arsenal saviour Mesut Ozil. We also have Theo Walcott, Lukas Podolski and Olivier Giroud as our attacking options, as well as Alex Oxlade-Chamberlain who can play wide or in midfield. Personally, I’ve gone with Ozil and Theo supporting Olivier Giroud. Theo’s pace and improved crossing mixed with Ozil’s creativity, guile and eye for a final pass should mean Giroud isn’t short of goalscoring opportunities. Also, with Ozil’s arrival we should see less of a reliance on long balls to the target man and more passing on the ground, meaning Podolski could thrive down the middle as well if required. Obviously Podolski can play out wide as well with his pace, but for me Giroud is the man who is bang in form.

So there you have it. We basically have sufficient cover in all areas of the pitch (helped by playing one or two players in different positions like Sagna and Vermaelen) and with a fully fit squad Arsene has a few selection dilemmas. The only area I am slightly uncomfortable about is the main striker role. If Giroud gets injured then Podolski is our only recongnised centre forward, and we know he’s already out for the next 10 weeks. If the big Frenchman gets injured now (God forbid) then we are really up shits creek without a paddle.