With Theo Walcott, Alex Oxlade-Chamberlain, Lukas Podolski and Abou Diaby still out with long term injuries, and Mathieu Flamini out for the next couple of weeks, our options in midfield and attack are somewhat limited.

Olivier Giroud is the only option up front but he looks burnt out at the moment. The way he collapsed after the final whistle against Crystal Palace summed up the huge effort and dedication he has in this Arsenal team. He has been simply awesome this season, and needs someone to come in a ease the burden.

The back five selects itself, so it’s the options in midfield Arsene has to choose. We don’t have Mathieu Flamini so who should the boss pick alongside Mikel Arteta? The only options are Jack Wilshere and Aaron Ramsey. Ramsey has played in the “deeper” role before but while he has the engine to do that job his natural instinct is to go forward and that has left us exposed at the back, so he would be better further up the field with Jack the one sitting a bit deeper. Plus Jack puts himself about a bit more and isn’t afraid to make a tackle. 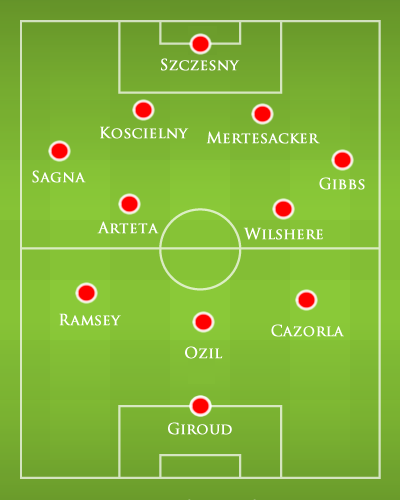 And the rest of the team selects itself. With Ramsey in the more advanced midfield role, Ozil and Cazorla make up the attacking backup for Olivier Giroud.

The game will be won and lost where Mikel and Jack are playing. If Liverpool are going to hurt is it will be on the break – that’s how Dortmund punished us, Crystal Palace caused problems (which lead to the Arteta red card) and Chelsea were happy to sit back and get us on the counter attack.

Will we learn our lesson and not be so defensively naive? We’ll find out today.

4 thoughts on “The Starting Eleven Arsenal Should Play Against Liverpool”