As the new Premier League season is upon us, like many others I imagine I’m taking in as much Arsenal news as possible – logging onto Football News websites, seeing what the latest is on Twitter and looking through YouTube for Arsenal videos.

But this compilation made by Calann Davies really got me thinking:

As well as being a fantastic compilation of About Diaby, it does raise a good question – what can he contribute to Arsenal?

For me, he is clearly a fantastic talent. Watching the video reminds you of just how good he can be, and Arsene Wenger clearly knows he is a player that is capable of controlling games and stamping his authority in any match.

We all hope and pray that About can stay injury free not just because he has the ability to give something special to the team, but also because he’s suffered so much over the last few seasons.

You’ve all probably seen this graphic from TalkSport already, but if you haven’t here it is: 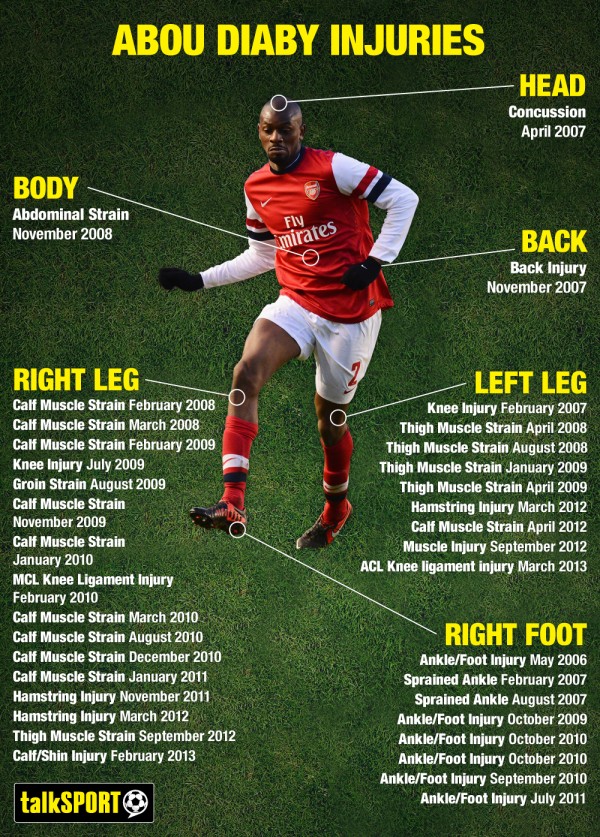 He’s suffered so many injuries it’s unreal – and I have no doubt that the assault in 2006 is responsible for them.

Along with the Champions League Final in 2006 and the FA Cup semi-final against Manchester United in 1999, the dangerous and quite frankly vicious, cowardly and pathetic “tackle” by Dan Smith is right up there with the saddest moments I’ve had as an Arsenal fan.

Back in May 2006, I was outraged by the tackle and the “reaction” from the media at the time.

And I still feel angry about it all, even 8 years on.

5 thoughts on “What To Do About Abou?”