Arsenal’s form this season has been patchy, and not that of a championship winning side. We all remember the 1997-98, 2001-02 and 2003-04 seasons and they all had the same characteristics – players who had massive belief, fight and desire, as well as a huge hunger to win. Added to that they knew the importance of the team, and were fighting for each other on the pitch. When you think of Arsenal successes, you instantly think of Patrick Vieira, Thierry Henry, Dennis Bergkamp, Tony Adams, Martin Keown, David Seaman – players who were gifted footballers but also leaders on the pitch.

In our title winning seasons, it could be argued that we always put out 11 leaders on the pitch every weekend.

This season though we’ve been poor and almost stuttered to 3rd place in the league, which is familiar territory for Arsenal fans and the last 10 seasons in particular have just been a series of groundhog days.

We have all kinds of problems on and off the pitch. Off the pitch we have a stubborn manager who refuses to spend (only £15 million this season) when we have all the resources to compete with the biggest transfers. Arsene’s argument is that he doesn’t want to overspend – but what about the loyal Arsenal fans who overspend every week! The fans paying crazy ticket prices home and away, have to travel all around the country and also buy over-priced merchandise from the club – the whole ethos of the club is ridiculous.

On the pitch it’s not much better. We have team of cowards, and a distinct lack of leadership on the pitch. We have a manager who is tactically inept, and doesn’t know how to change things during the game, making strange substitutions and playing out of form players over young, hungry ones.

Yet, we are “only” 6 points behind the league leaders: 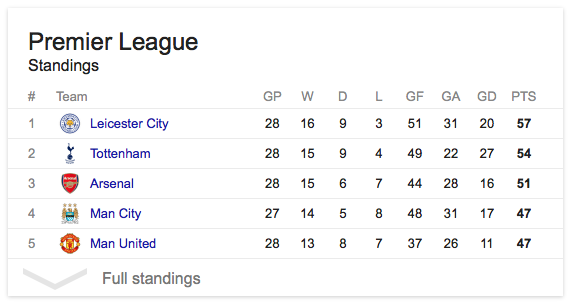 With 10 games of the season to go, despite the teams awful form in the league, we are still not mathematically out of the title race.

If Arsene Wenger gets his act together, puts out 11 players who want to win for the club and plays them in the right positions in the right system, then the league is not impossible.

In previous seasons, our current form and performances would have meant we were well out of the race by now, but in a season where literally anything can happen, we still have a (very slim) chance.

But it would mean not making any more mistakes which looks impossible because that’s all we are doing at the moment. It means having the balls to drop players like Aaron Ramsey, Alexis Sanchez, Theo Walcott and Olivier Giroud who are out of form and out of confidence.

But will Arsene do that? We all know the answer to that don’t we?

I know that most Arsenal fans have thrown in the towel (myself included) but it is still possible. In previous seasons we’ve been top at this stage of the season and famously bottled it (which is pretty much every season) but for me, we have reached rock bottom and things surely can’t get any worse?

We lost to a hugely under-strength Manchester United side, we lost at home to relegation-battling Swansea City – how worse can it get? We can’t play as badly as we have been and show the lack of desire and commitment that we’ve shown because it is the worst I’ve seen for a long time.

The manager has to get his act together, give the team a massive kick up the backside and show us all he is worth his £8 million a year wages.

We have reached last chance saloon in the league and Arsene Wenger and his players need to get their act together, starting today against Tottenham Hotspur.

7 thoughts on “Arsenal Can Still Win The Premier League! We Just Have To Believe!”