There has been some debate about who should be in Arsenal’s starting eleven if everyone is fit – especially as Olivier Giroud is in such fine form. But as the statistics show, his goals have come late in games and for me, he is best used as Arsenal’s super-sub.

Earlier on in the season, Arsenal were flying. Mesut Özil was pulling all the strings with Alexander Iwobi and Theo Walcott flying either side of him, and with Alexis Sanchez as the main man. The amount of pace those three possess is scary enough and with Özil finding them with pass after pass, opposing teams couldn’t handle us. They used to say that with Dennis Bergkamp, you could literally run into the space and the Master Dutchman would find you. With Mesut Özil, it’s a similar story.

Another fantastic facet with the front line of Alexis, Iwobi, Walcott and Özil (apart from the devastating runs from deep) was that Sanchez was somewhat of an assist-master himself. As well as being direct, hungry and leading the line with passion, he had that ability to drop deep and pick out a deep lying runner with a killer pass. This season he’s scored 20 goals and given 10 assists, but unfortunately those have somewhat dried up with Giroud as the main striker.

For me, excluding Santi Cazorla who is out with a long term injury, this is the best possible side we have when everyone is fit: 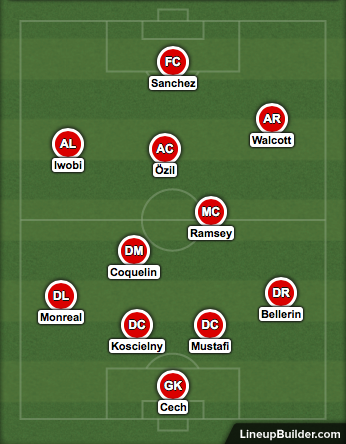 But who do you think should be in Arsenal’s best starting eleven? Leave your thoughts in the comments section below!

1 thought on “What Is Arsenal’s Strongest Starting Eleven?”