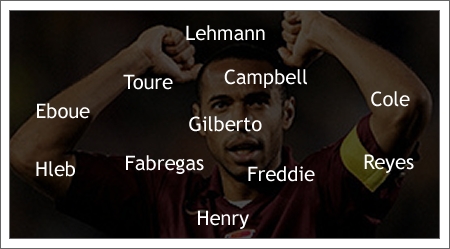 What you see above is most likely the stating line-up for the biggest game in Arsenal’s history.

Senderos and Flamini have been passed fit and have been included in the Arsenal squad for the Champions League Final tomorrow but they could (and most likely will) miss out to Ashley Cole and Sol Campbell.

The rest of the team picks itself – I can’t see our D’Artagnan starting ahead of Jose or Freddie. Hleb has proved he can track back well and tackle, and Reyes and Ljungberg offer a stronger option defensively.

And if the game is tight then Pires is always a decent option to bring on after an hour to open things up.

The only two controversial decisions Arsene Wenger has to make is regards to Senderos/Campbell and Flamini/Cole.

If Senderos is fit enough and ready then for me there is no contest. Senderos has been at the heart of the European campaign and must start if he can. Sol Campbell has been an awesome defender for us but the fact is that he hasn’t recaptured the form of the last few seasons.

Our indifferent display against Villarreal in the 2nd leg was mainly due to Campbell and his lack of confidence in his pace. We played far too deep and Villarreal piled on the pressure for 90 minutes. Only a fantastic penalty save from Jens Lehmann got us out of jail.

Barcelona are going to be much more of an attacking threat than Villarreal will be, and with Campbell at the back I would be worried. Jason Roberts easily bullied Sol in the Wigan game and if it wasn’t for the worst referee in the Premier League we would have conceded a penalty.

Ask most Gooners and surely it has to be Senderos every time.

Luckily as we saw with last years FA Cup Final, Wenger is not afraid to make difficult decisions and drop Campbell for Big Phil.

Then we come to Ashley Cole.

Three to four weeks ago Cole would not have had a look in for tomorrow’s game. But the injury to Flamini has made Cole the favourite to start tomorrow, as he has started the last few games and seemingly got his fitness and sharpness back.

Recent interviews also indicate that Cole is more than happy at Arsenal – he’s joking with Henry and speaking positively about the club.

But with a Champions League Final coming up then you have to wonder – has he really put everything behind him after running off to Chelski?

Arsene has a couple of major decisions to make tomorrow and I hope he can make the right ones!

3 thoughts on “Senderos & Flamini Back In Contention?”