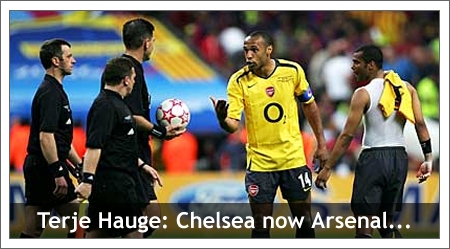 Last night it was a hard defeat to take. I didn’t and just couldn’t sleep at all last night thinking about the game.

If Barcelona had beaten us 5-0 and completely battered us it would have been much easier to take. But to be within 14 minutes of the biggest prize in club football is demoralising.

To play with so much passion and drive and to still lose was devastating. Arsenal started the brighter, and up to the sending off pretty much dominated the game. Henry had two great chances and only an alert Victor Valdez prevented Arsenal taking a much deserved lead.

But then on 17 minutes the game totally changed.

Once I saw Lehmann pull down Eto’o I knew he’d be sent off. And I won’t begrudge the referee for giving Jens an early bath. I know a lot of people were saying that they should have played advantage and let the Barca goal stand, but the referee didn’t allow any advantage and blew up early. Once that happened there was only one outcome.

Despite that though, what I will say is that the referee had a terrible game last night. To book Henry for winning the ball off Van Bommel was a disgrace. Then how Marquez, Puyol and Van Bommel did not see at least a yellow for their persistent fouling was unreal.

Apparently this was the same referee that sent off Chelsea’s Del Horno against Barcelona’s Messi earlier on in the competition.

But ironically his inadequate refereeing led to our first goal. Eboue linked up well with Henry and Hleb on the right hand side, nutmegged Puyol and pretty much dived to win a freekick.

From the resulting freekick, Henry delivered a sublime cross into the area for Sol Campbell to emphatically head into the Barcelona net.

I have never celebrated a goal like I did last night. Sol needed to put in a great performance and he stepped up to the plate when we needed him and he got us that vital goal.

After that it was a brave performance from the lads, and although defending for most of the game managed to carve out a couple of great opportunities to kill the game off.

Henry did have a big, big chance which most people would say was the turning point of the game. As he said himself though, at that point he was running on empty. He had been running for everything and I can’t blame him for not scoring – he was dead. He couldn’t feel anything in his legs anymore.

To be leading in the biggest club competition in the world until 77 minutes with 10 men is an awesome achievement. Could anyone else have done that?

But the fact is Barcelona lifted the trophy after 98 minutes, and as much as it pains me to say it I’d like to congratulate Barcelona. And boy does that hurt. God it hurts.

Arsenal can be proud in the fact the couldn’t have done any more to win the Champions League. They played excellently and stood tall when they had 10 men.

But at the moment it feels like second place is nothing – and it is a bitter pill to swallow.

I’ve had enough of talking about the game – below are the player ratings:

Jens Lehmann: 5/10
Coped well from shots from Guily and Deco before being dismissed. He was the man against Villarreal but against Barcelona his judgement failed him and gave Arsenal a real uphill battle after his sending off.

Emmanuel Eboue: 8/10
Ran for everything and didn’t let the side down. Maybe should have been closer to Eto’o for the first goal instead of playing offside but handled Ronaldinho well.

Sol Campbell: 7/10
Good performance and managed to get that vital goal that 10 men needed. It gave Arsenal something to hold on to and gave us hope that Champions League glory beckoned.

Kolo Toure: 9/10
Awesome yet again. Won every tackle and fought with heart and desire.

Ashley Cole: 7/10
Apparently played Eto’o onside for the sending off but despite that played well. Like most of the players could really attack once we were down to 10 men.

Alexander Hleb: 7/10
Showed good skill and running and once the sending off in the 17th minute had to help back and his offensive threat suffered. Had a big chance in the second half to settle it and should probably have done better.

Cesc Fabregas: 5/10
Not one of his best games, and suffered because of the sending off. Couldn’t risk pushing forward as he would have liked and couple impose himself at all in the game. Out bullied by Van Bommel and Edmilson.

Gilberto Silva: 9/10
The invisible wall held out for so long and did brilliantly to keep Barcelona at bay. In the end they had to go around him through the wings to score.

Freddie Ljungberg: 9/10
As usually fought and ran for every ball in defence and attack. Carved out a chance for himself which was saved well by Valdez. Couldn’t have asked any more from the Swede. He was cynically fouled on a regular basis but the Barca players were rarely punished.

Robert Pires: 4/10
Not enough time to make an impact. Had to make way for Almunia’s introduction and was a sad end to a brilliant Arsenal career.

Thierry Henry: 9/10
A real captains performance. Led from the front, was excellent in the first 15 minutes – carving out two great chances for himself. Looked really up for it and even when Lehmann was dismissed he ran for everything. Missed a big chance late in the second half but by that time had no legs left. Blasted the referee and Barcelona players for lack of sportsmanship and really deserved better luck in his hometown.

Manuel Almunia: 8/10 (for Lehmann 17)
Hadn’t played a competitive game for around 4 months but kept us in the game with a great save from Eto’o just before the break. Made a string of good saves and was unlucky on the two goals Barcelona scored.

Mathieu Flamini: 6/10 (for Fabregas 73)
Got the final appearance he deserved but couldn’t really get with the pace of the game. Valiant effort to stop Belletti’s winner and was agonisingly close to doing so.

Jose Antonio Reyes: 5/10 (for Hleb 85)
Came on too late to make any sort of impact. Should have started the game in my opinion with the pace and energy he offers.

50 thoughts on “Last Night Still Hurts. My God It Hurts…”