What a sad day for Arsenal.

On Monday Arsenal officially lost their captain Cesc Fabregas to Barcelona, and yesterday even worse news, we lost our charismatic and popular utility man Emmanuel Eboue to Galatasaray.

This summer we’ve also lost Denilson to Sao Paulo and Carlos Vela to Real Sociedad to year long loans, and it looks like Bendtner is on his way out. And we also know about Samir Nasri and his infamous Tweets. 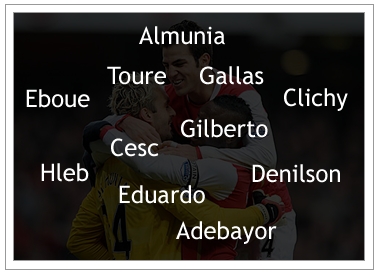 The end of an era?

Arsene Wenger is now onto his next generation Arsenal team and will they be able to achieve as much as the last set of players?

And don’t forget we’ve had other Arsenal legends leave during that time as well, including Jose Antonio Reyes, Julio Baptista, Mikael Silvestre, Amaury Bischoff, Mathieu Flamini, Jeremie Aliadiere and Philippe Senderos. They all will be truly missed.

Just like when the last member of The Invincibles left Arsenal, I am deeply upset same fate has befallen The Unachievable’s.

But players come and go, and Arsenal must stay strong. And remember we have managed to keep hold of the best player from all of those mentioned above, the man who will lead this next Arsenal side to unprecedented glory. That’s right, we still have Manuel Almunia.