With all the rumours going around about who we might sign, silly season has gone into overdrive. With only a handful of “facts” being made public, and most of the other news pure hearsay, I have come up with two possible starting elevens for next season; Rumour Mill Starting XI and Realistic Starting XI (sorry I couldn’t come up with more exciting names).

If we believed everything we’ve been hearing since the end of the season, we would have one formidable starting eleven: 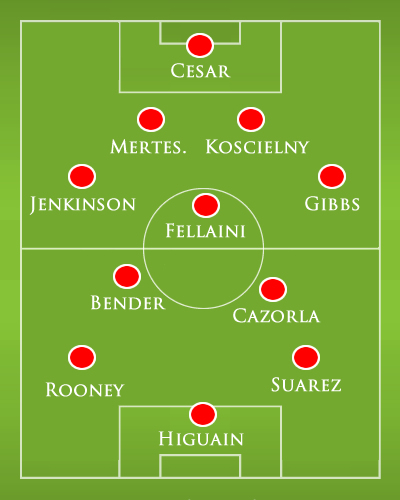 We haven’t been linked with any defenders which is strange, considering we need defensive cover with the departure of Djourou and Santos surplus to requirements. There are rumous about Sagna moving to big-spending Monaco or PSG, so it could be the season for Jenkinson to shine.

Fellaini is a player that there have been rumours about for a while, and with our rejected bid for Lars Bender, it’s possible we follow that up with an improved bid. We’ve already bid for Suarez, and with TLTDTEW most people had that one all sewn up. And we all know about the rumours about wantaway Rooney.

Overall, if we did purchase all of our “linked” players, then we really would have a team that could compete for the Premier League title. Of course though, this is all fantasy football.

However, after getting being brought down to reality in recent days, then below is our most realistic starting eleven for next season: 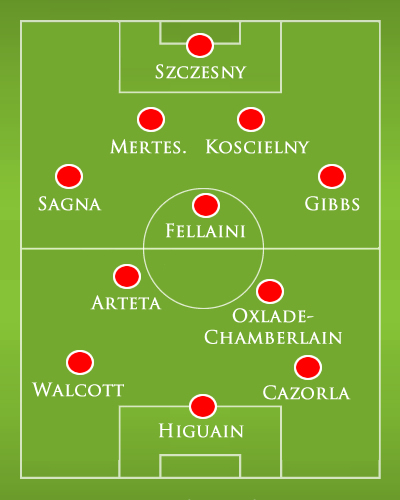 If we’re being realistic, we’re either going to bring in no-one or just a couple of decent signings. At this early stage of the transfer window, and call me optimistic, I would put money on Higuain and Fellaini being those deals. While they may not happen, I see them as being far more realistic than Rooney, Suarez and Bender arriving.

They may not be the exact signings in the end, but I’m sure Arsene knows that we need another central defender, midfielder and striker.

Djourou has moved to Germany on loan so cover in that position is vital, especially with the news that Vermaelen has picked up a small injury. We need another body in midfield as we can’t rely on Wilshere maintaining his fitness for a full season. And then upfront, we could do with a lethal striker who takes the chances we create.

And this could be the season where Oxlade-Chamberlain makes the step up and becomes a regular starter for us. He certainly has the talent and ability, and it seems like Arsene is ready to give him a real chance.

If you think about it, if we brought The Ox into the starting eleven it would be like a new signing!